In 1989, Florchita “Chit” Bautista, along with like-minded Filipinos doing work among migrants, established AWARE, a volunteer endeavour to reach out to Filipino domestic workers who came to Canada under the Foreign Domestic Movement Program (now the Live-In Caregiver Program). AWARE undertook educational and supportive workshops to facilitate adjustment to life in Canada and to inform the participants (mainly women) of their rights. The graduates of these programs constituted themselves into a migrant workers’ organization that they then called GABAY (Guide).
Now, members of GABAY and AWARE are coming together for a reunion, to reflect on their history and past experiences and strive to renew their commitment to serve their kababayans and co-workers.

(click link) For more pictures go to the album

Light a Candle for Jocelyn 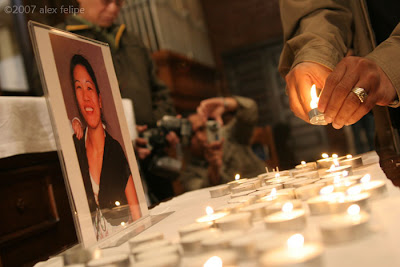 Jocelyn Dulnuan, 27 years old, of Namulditan, Hingyon, Ifugao, the Philippines was found dead on Oct. 1, 2007 in the house located at 2450 Doulton Place, Mississauga where she worked as a live-in caregiver. Jocelyn had arrived in last November through the Live-in Caregiver Program of the Canadian Government. Peel regional police are investigating her death and treating it as a murder case.

Twelve days have already passed since the discovery of her body. Press reports as of today are conflicting over whether the police have already finished their investigation. The police for its part have been very tight-lipped about the case. We hope this has only been so as not to jeopardise the investigation.

Jocelyn Dulnuan's murder raises important issues of public safety, equality and justice for the Filipino community. Given the recent problems regarding the treatment of Filipinos by certain police departments in certain jurisdictions in , the fear exists in the minds of many in the Filipino community that Dulnuan's murder may not get the serious and prompt treatment it requires. We need to know that the police is taking this case seriously and not doing a slipshod job because Jocelyn is a Filipino, and a migrant worker.

The proper institution to ensure that justice is pursued and the muderer(s) of Jocelyn punished is the Philippine consulate. It is the role of the Philippine consulate to protect the rights of Filipinos in and surrounding regions. At the very minimum the Philippine consulate has the duty both to pull every diplomatic lever it can to ensure that justice is thoroughly pursued by the local Canadian authorities while keeping the Filipino community properly informed of its efforts. We note that Philippine Department of Foreign Affairs spokesman Claro Cristobal said that Foreign Affairs Secretary Alberto Romulo has instructed Alejandro Mosquera "to provide full cooperation for bringing anyone responsible for the crime to justice...." Given the sorry history with other cases of Filipino migrants that have come to grief and the initial response of the local consulate and labour attaché to our approach for help, we can only hope that these instructions are not mere public relations exercises. If any harm comes to a Filipino abroad, will the consulate just leave that person behind and hush matters?

Jocelyn Dulnuan would be alive now if the Philippine government had been able to provide the employment back home sorely sought after by so many Filipinos rather than relying on sending people abroad for remittances. We hope that Jocelyn is not a sacrifice to this policy of exporting Filipino workers.
The Jocelyn Dulnuan Support Committee is composed the following Migrante-Ontario organizations: Damayan Migrant Resource and Education Centre, Philippine Advocacy Through Arts in Canada (PATAC), SIKLAB-Ontario, Ugnayan ng Kabataang Pilipino sa Canada-Toronto (UKPC-TO), and United Filipinos for Nationalism and Democracy (UFiND); the following organizations: Asosacion Negrense, AWARE/Gabay, Community Alliance for Social Justice (CASJ), Ifugao Association, Philippine Independence Day Council (PIDC), Philippine Network for Justice and Peace, and the Santaginian Association of Ontario; Fr. Ariel Dumaran of San Lorenzo Ruiz Parish and members of Jocelyn Dulnuan's extended family and friends.

Email: siklab_ontario@yahoo.ca.
pictures from the prayer rally go to:
http://picasaweb.google.com/damayan.center/LightACandleForJocelyn

Pictures from our events

From a rainy CASJ (Community Alliance for Social Justice) Picnic and PATAC (Philippine Advocacy Through Arts-Canada) table at the Mabuhay Festival in Toronto.

Click the PICNIC for the CASJ Picnic and TABLE for the Mabuhay Festival tabling.

Folks from Siklab, UKPC, PNJP and UFiND took advantage of the nice Canada Day weather. They spent most of the day getting to know each other, playing Charades and singing.

Pictures from the Concert 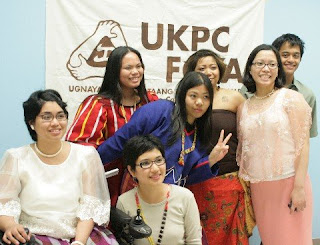 Tinig ng Kalayaan Fund-raising concert was held at the Parkdale Library Auditorium last Saturday, June 23rd. It was a successful and well attended concert. More than a hundred people listened, participated in the "History Trivia" and raffle. There were also lots of food donated by individuals and volunteers to help make the event a success. UGNAYAN ng Kabataang Pilipino sa Canada - Toronto (UKPC-Toronto) and the Care for Ching Committee (C4C) wished to thank everyone that came to the concert and those that tirelessly volunteered to make this happen. 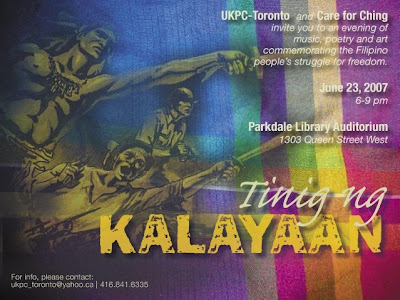 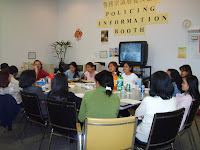 Members of United Filipinos for Nationalism and Democracy-Toronto (UFiND), a Migrante organization just two months old, celebrated Mother's day at a local downtown community centre. Twelve members were able to attend while others expressed their regrets as they were forced to work by their bosses. A new plan was hammered out for the rest of the year. The central campaigns included the call to scrap of the LCP (Live in Caregiver Program) for one not onerous on migrant workers, a campaign against employment/immigration agencies exploiting those going through the LCP, and the Stop the Killings campaign, and the $10 minimum wage now campaign. Members also vowed to contact relatives and friends in the Philippines to urge them to vote for Gabriella Women's Party.

The community forum on human rights in the Philippines was held last Saturday. Guest speakers were award-winning filmmakers Malcolm Guy and Marie Boti, Atty. Renato Pambid of the Workers Assistance Center, Philippines and Bern Jagunos from the United Church of Canada. Malcolm and Marie shared their experiences being with people's organizations and how it felt attending several funerals of killed activists. Malcolm and Marie are founding members of Centre for Philippine Concerns in Montreal that is celebrating its 25th years of building solidarity between Canadians and the Philippines. Atty. Pambid talked about the struggles of workers of the company that is a sub-contrator of Walmart. He is in Canada to attend the "Resposible Purchasing" conference that was held in Montreal. And lastly, Bern Jagunos shared the current efforts of the church sector in Canada in addressing the issue of political killings in the Philippines.

The Stop the Killing in the Philippines campaign is an on-going campaign of DAMAYAN Migrant Education and Resource Center. The victims of these killings are trade unionists, peasant farmers, teachers, priests and students advocating for the rights of their communities. Their names are Diosdado «Ka Fort » Fortunato, leader of the union at Nestle , gunned down in 2005, leaving a widow with six children; Bishop Alberto Ramento, one of the hightest officials of the Philippine Independent Church, a priest of the poor, stabbed as he slept in his church; Professor Jose Ma. Cui, gunned down in front of his students as he supervised an exam; Ma. Luisa Posa-Dominado and Nilo Arado, abducted by the military 12 days ago and still missing; Gracila Buya, a nine-year old girl in Grade 2, found shot by a stream near her home.

Over 840 such killings have taken place in the since 2001, when President Gloria Macapagal Arroyo came to power. The military strategy guiding this climate of impunity is called Oplan Bantay Laya, which considers civilians legitimate military targets, claiming they are members of «communist fronts». It is the Philippine version of the Bush administration's
«War on Terror».

See the pictures of the event click on link. Or cut and paste: http://picasaweb.google.com/damayan.center/TestimoniesFromThePhilippines

Pictures from the Workshop 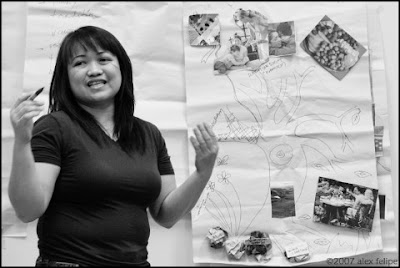 An organizational workshop was held on Sunday. Its objective is to drawout issues related to the LCP and Building the organization. Check out the pictures of the workshop at our album by clicking the link.

or cut and paste: http://picasaweb.google.com/damayan.center/OrganizationBuildingWorkshop?pli=1

Testimonies from the Philippines 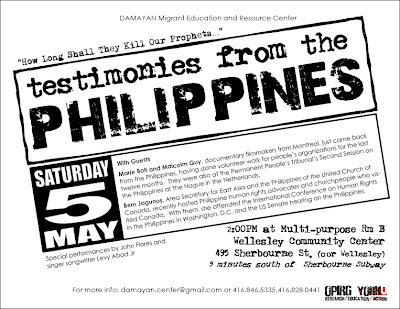 The human rights situation in the continues to worsen. Since President Gloria Macapagal-Arroyo came to power in 2001, KARAPATAN ( for the Advancement of People’s Rights), the largest alliance of human rights organizations and advocates in the , has documented over 830 victims of extrajudicial killings. More than0 200 have survived assassination attempts. More than 200 have been forcibly disappeared, including the two activists Maria Luisa Posa-Dominado and Nilo Arado who were recently abducted even as another human rights worker who was shot in the neck is currently fighting for his life. Most of the victims are trade unionists, church people, journalists, lawyers, farmers, women, students and others actively opposing the Arroyo regime’s undemocratic and anti-people policies.

Not only are the number and sheer brutality of the pattern of these killings and human rights violations alarming, there is also the fact that the killings continue unabated and with impunity despite evidence of the Arroyo regime’s culpability for these atrocities.

May 5th Damayan Migrant Education and Resource Center hosts a forum on the current situation in the Philippines. Marie Boti and Malcolm Guy, documentary filmakers from Montreal, have just spent twelve months doing volunteer work with the people's organizations in the Philippines. They will speak about the wave of political killings targetting progressives and oppositions politicians in the country, particularly in the current election campaign. They will also speak about the international campaign to Stop the Killings, and the Permanent People's Tribunal (PPT) in the Hague Netherlands, March 21-25, which they just filmed. The PPT, with the jury of prominent persons from around the world, found the Philippine government and the US George Bush administration guilty of "crimes against humanity"

Bern Jagunos, Area Secretary for East Asia and the Philippines of the United Church of Canada, joins these two guests as she gives an update on the recent North American tour of ecumenical and human rights visitors. With them, she attended the International Conference on Human Rights in the in W, and the US Senate hearing on the .

The forum will be at the Multipurpose Room B, first floor of the Wellesley Community Center, 495 Sherbourne St. (cor Wellesly, 5 min south of Sherbourne Subway) at 2:00PM