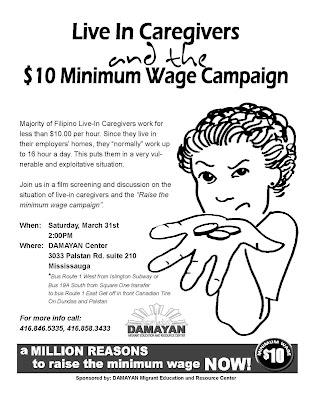 The raise the minimum wage campaign is a fast-growing campaign with the support from labour and community groups. This proves that Canadians from all backgrounds want a just minimum wage.

The Toronto & York Region Labour Council, representing 195,000 unionized workers in the Greater Toronto Area, is spearheading the campaign to raise the minimum wage to $10 an hour. Their decision to do so comes as Ontario NDP MPP Cheri DiNovo had her $10 minimum-wage Bill 150 pass second reading. Third reading is set for March 19, and the provincial elections are coming on Oct 10, 2007.

For Filipino Migrants this is an important undertaking in our struggle for our rights and welfare. Filipinos like other migrant community are at the bottom of the wage scale. They work as caregivers, service providers and factory workers. Here in , Filipino nurses and professionals doing 24 hour home support work as “caregivers or domestic workers” get as low as Cdn$1.50 per hour. In general, the largely Filipino domestic workers earn an average of $7.36 if they work a 44 hour work-week. Majority if not all of them work way more than that because of their live-in condition.

DAMAYAN Migrant Education and supports and participate in the “Raise the Minimum Wage Campaign” because raising the wage will temporarily alleviate the low wage burden that migrant Filipinos are carrying. They not only support themselves and their families here but also their families back home. 20% of 80 million population of the are dependent on the remittances that migrant Filipinos send home. Supporting the campaign is the right and moral thing to do.

Join us in a film screening and discussion on the situation of the live-in caregivers and the $10 minimum wage campaign.